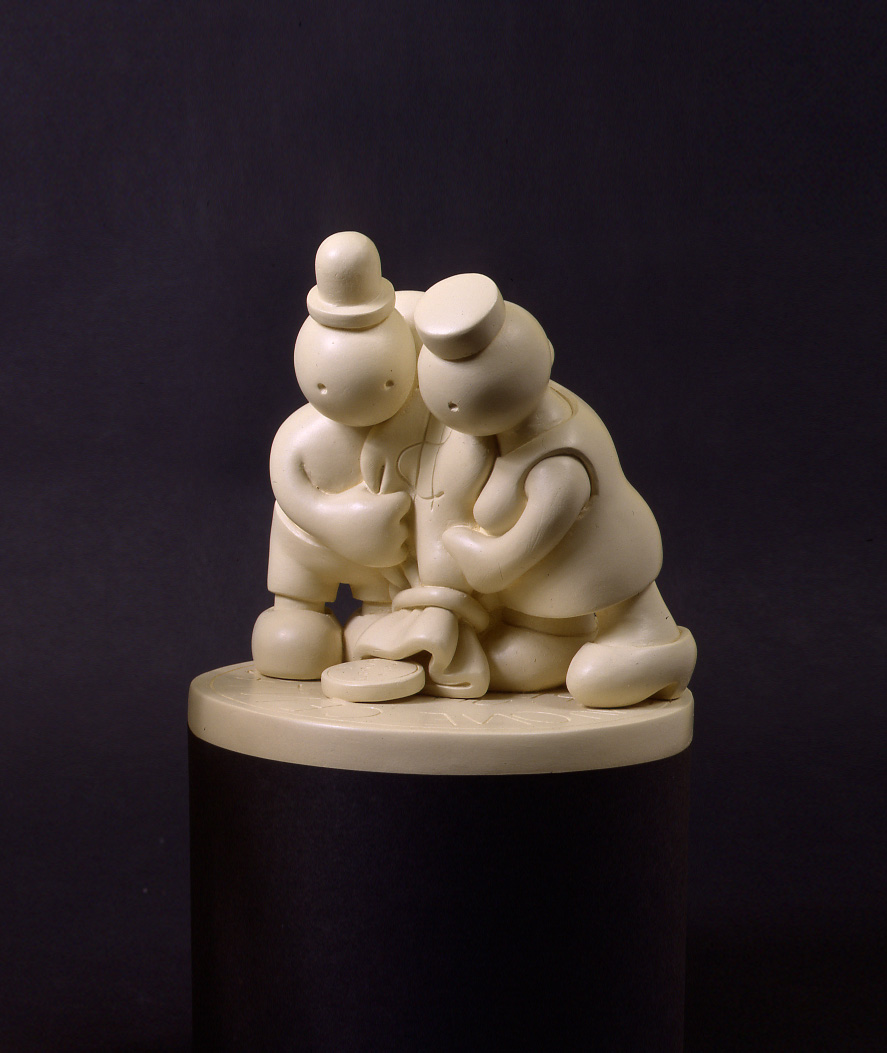 Two figures emptying the last penny from a moneybag.

Tom Otterness was born in Wichita, Kansas in 1952. He came to New York City in 1970 to study at the Arts Students League, and in 1973 took part in the Whitney Independent Study Program. In 1977 he became a member of Collaborative Projects, a pioneering community of independent artists, and took a leading role in organizing Colab’s 1980 Times Square Show, which was called “the first avant-garde art show of the ‘80s” by the Village Voice. Otterness is one of a handful of contemporary artists invited to design a balloon for the Macy’s Thanksgiving Day Parade, for which he devised a tumbling Humpty-Dumpty in 2005. Otterness lives and works in New York. Otterness may well be “the world’s best public sculptor,” as the art critic Ken Johnson opined in the New York Times in 2002. Public art is his focus, and Otterness has had major outdoor exhibitions of his sculptures on the Park Avenue Mall in New York (2003), in more than a dozen sites in downtown Indianapolis (2005), on the grounds of the Beverly Hills city hall (2005-06) and throughout Grand Rapids, Michigan (2006). His first solo exhibition, held at Brooke Alexander Gallery in New York in 1983, featured elements of “The New World” (1991), a white plaster frieze of 250 nude “Ur-people,” as essayist Hayden Herrera called them, eventually destined for the plaza of the Edward R. Roybal Federal Building in Los Angeles, a General Services Administration commission. In the U.S., Otterness has completed at least three dozen public commissions, including “Life Underground” (2004), his celebrated multi-figural bronze sculpture installation for the New York Metropolitan Transportation Agency at the 14th Street station on the Eighth Avenue subway lines. His international commissions include public plazas in Münster, Germany (1993), Toronto, Canada (2007), and Seoul, South Korea (2010), and a large public park in Scheveningen, the Netherlands (2004). His most recent public work, “Creation Myth,” a gateway park for the Memorial Art Gallery in Rochester, N.Y., was dedicated in 2014. Otterness has exhibited his work at Marlborough Gallery in New York, John Berggruen Gallery in San Francisco, and other important contemporary art galleries. His most recent exhibition, “Tom Otterness: Tipping Point,” opened at Marlborough in September 2017. Works by Otterness are included in the collections of the Museum of Modern Art, the Whitney Museum of American Art, the Guggenheim Museum, the Eli Broad Family Foundation, the Brooklyn Museum, the San Francisco Museum of Modern Art, the Carnegie Museum, the Museo Tamayo in Mexico City, the Israel Museum in Jerusalem, and others. He was elected a member of the National Academy in 1994. http://www.tomotterness.net/about