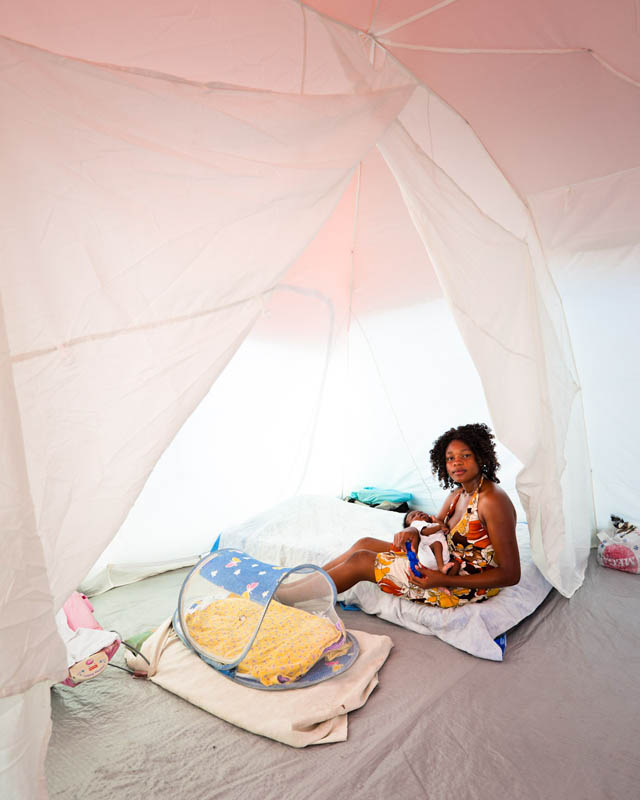 This photograph was taken in March 2010 after the devastating earthquake left over 1 million people homeless in Port au Prince, Haiti. Vanessa seen here with her new born was the sister of Wilson, our translator. She was living in a bright white tent donated by the Red Cross. Sadly, her husband died in the earthquake. Vanessa gave me permission to use this photograph as the cover of my book Tent Life: Haiti. Through sales of the book and our collective Hey You Haiti, we raised over $40,000  with Healing Haiti to build an orphanage home in Haiti.

Wyatt Gallery (b.1975) is a Philadelphia native and past adjunct-professor at the University of Pennsylvania. He received his BFA from NYU Tisch School of The Arts in 1997 and is the recipient of various awards including a Fulbright Fellowship to Trinidad, the PDN 30, PDN Rising Star, and the International Center of Photography’s 2017 Infinity Award in New Media for For Freedoms. He has published four books and is in numerous public and private collections such as the Museum of Fine Arts Houston, the George Eastman House, the Museum of The City of New York, the New Orleans Museum of Art, the Worcester Art Museum, Comcast, Twitter, and American Express.

Wyatt’s work has been reviewed in The New Yorker and featured in Esquire, Departures, Condé Nast Traveler, The New York Times, Mother Jones, and on Oprah’s OWN Network and NY 1 News, amongst others. His past books Tent Life: Haiti (Umbrage, 2011) and #SANDY (Daylight, 2013) have successfully raised over $60,000 to support communities affected by natural disasters. In 2017 Gallery published Jewish Treasures of The Caribbean; The Legacy of Judaism in the New World (Schiffer, 2017), of which the exhibition has been traveling throughout North America and the Caribbean since 2014.

Gallery has given talks at MoMA PS1, New York University, the School of Visual Arts, the New School, Wharton, Kutztown University, the International Center for Photography, and numerous high schools.