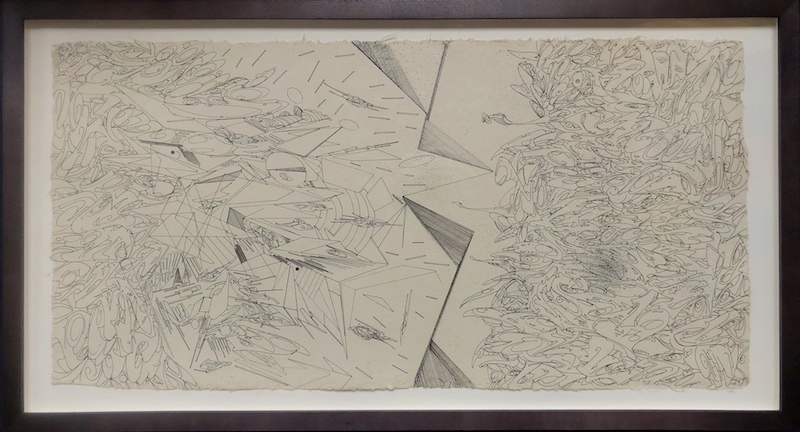 
About Christian A Mendoza:

Christian Aaron Mendoza is a New York City based artist from Nicaragua whose work draws from early experiences with nature, architecture, art history, books, and influences of New York City, Miami, Tokyo and his travels. Mendoza’s style bridges the modern, primitive, and organic. He draws strongly on the nature and folklore of his Latin American heritage and his World Wide Studies while interpreting the density and chaos of daily urban life.

In the 1980’s his family moved to the Bronx where Mendoza began to develop a style that combining architectural draftsmanship he learned from his father with the new inspirations of museums, libraries, galleries, letters, faces, and forms that then covered the subways of the city. At a young age, he learned drafting and about architecture from his father. This inspiration brought Mendoza to the study of ancient civilizations, hieroglyphs, petroglyphs, calligraphies, and alphabets from both past and modern cultures in the Americas. With great dedication he continued his study of world alphabets, art history, color, light energy and movement, working in a range of styles that culminate all the influences of his early development.

His paintings are grounded with descriptive line work that creates a sense of movement and energy. A visual manifestation of the sonic combinations found in early Electronic Music, Comic Books & early analog Hip-Hop mixtapes and performances emanate from his surfaces. Interchangeability between the sense of visual and audio is an artistic subject that has been pursued universally and historically, and Mendoza’s practice can also be positioned in that context. It is something that goes beyond an ordinary world that an individual perceives through the five senses, instead, it enables an individual to access the supernatural/mythological world through so-called collective unconsciousness. Science-fictional elements that can often be seen in Mendoza’s works function as motives to emerge such a mythological world from the mixture of ancient culture and urban life experience that are his resources of inspiration.