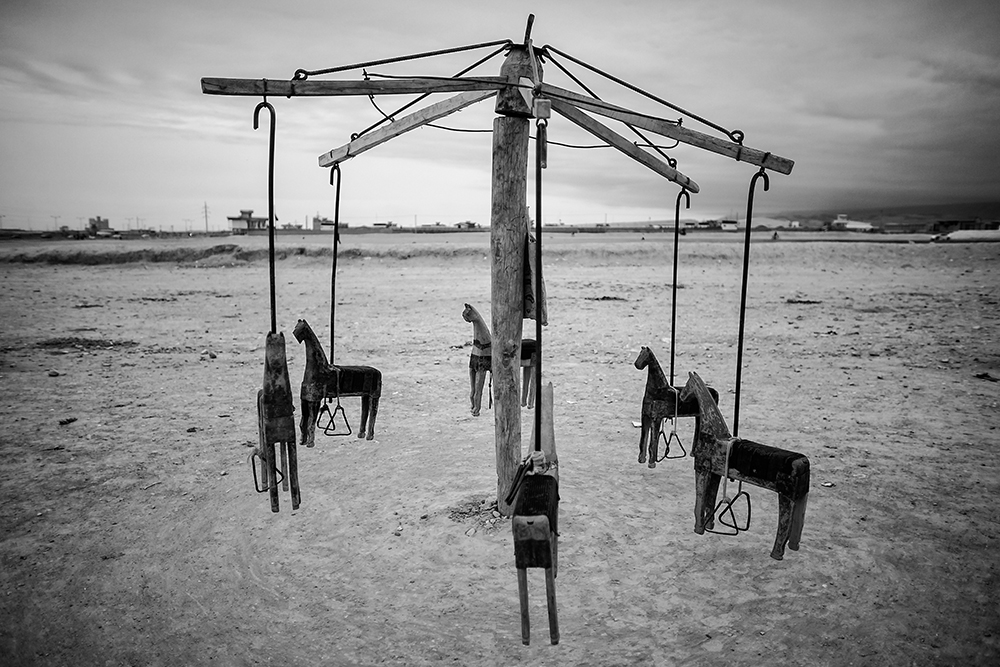 
A children’s play structure with wooden horses in Afghanistan.

The photograph is part of the book Life in War by Majid Saeedi, recipient of the 2014 FotoEvidence Book Award.

Life in War by Iranian photographer Majid Saeedi is probably the only book about Afghanistan that doesn’t show images of war. For ten years his camera photographed daily life in the context of war.  Speaking the language, Majid embedded with the Afghan people rather than with an alien army. His photographs reveal the humanity of a people living through decades of war.
“ His sensitive eye, artistic vision, journalist’s skills and intimate access combine to create this illuminating portrait of a country we in the west only see through the eyes of military intervention, the deaths of our soldiers, the failure of our policies and the abject vision of this country’s people, culture and way of life”.

From Ed Kashi’s introduction to Life in War.

Majid Saeedi is an award-winning, internationally recognized Iranian photographer. He has photographed throughout the Middle East for the past two decades, focusing on humanitarian issues, with a special interest in telling previously untold stories of social injustice. He also especially enjoys doing street photography – portraying citizens and ordinary life.

Saeedi was born and raised in Tehran. He took up photography at the age of 16 and, when he turned 18, went to the Iran-Iraq border to photograph refugees there.

Saeedi has managed the photography departments of various news agencies in Iran and has led key projects for over 15 years. His work has appeared internationally, in such publications as The Times, Spiegel, Life, The New York Times, The Washington Post, The Washington Times, Time magazine, and various Middle Eastern publications and for online agencies. His recent work includes images of Libyan people fighting for democracy, and landmine victims in Afghanistan.

Saeedi has won numerous prizes for his photographs around the world, most recently the 2012 R.F. Kennedy Award, a Lucie Award in 2011, for his work in Afghanistan, a UNICEF award in 2010, and the Gold Award from China in 2011. For the past eight years, he has received the annual accolade of best photographer in Iran. When he is not working, Saeedi likes to teach photography to students and mentor young photographers.