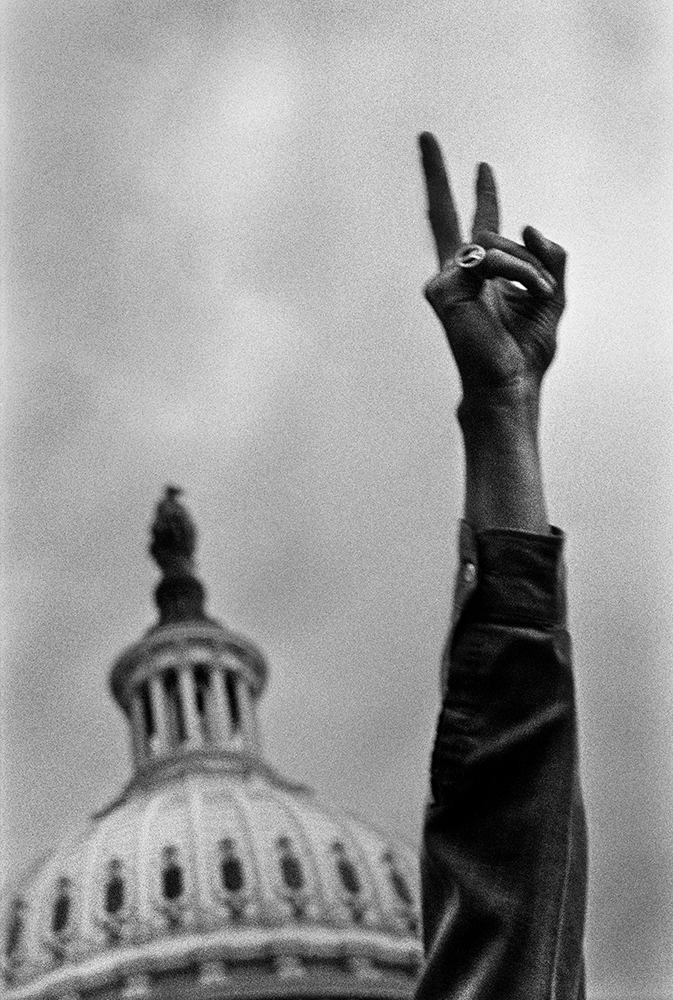 The print is produced from a digital file  on the highest quality Fine Art Paper Matte or Baryta with signed by the photographer certificate of authenticity.
FotoEvidence Authentic Stamp on the verso.

Ken Light is a photographer whose work has appeared in books, magazines, exhibitions and numerous anthologies, exhibition catalogues and a variety of media, digital and motion picture. He got his start in 1969 photographing for alternative newspapers and magazines which were widely published in posters, books and hundreds of periodicals.

His most recent book What’s Going On? 1969-1974 explores his earliest work as a young photographer documenting the social landscape of America as it roiled with upheaval.

Valley of Shadows & Dreams (Heyday Books) was published in 2012. This work was published in the New York Times, Newsweek/Daily Beast, N.Y. Review of Books, Huffington Post Voces and this work was exhibited in one person shows at the Oakland Museum of California, Umbrage Gallery, Arte Americas and S.E. Museum of Photography. It received the California Book Award in 2013.

His previous book, Coal Hollow (University of California Press) was published in 2005. It presents arresting black and white photographs and powerful oral histories that chronicle the legacy of coal mining in southern West Virginia.

Texas Death Row  (1997) is a look at life inside the death house as the condemned wait to be executed in Americas largest and most active Death Row. This work was published in Newsweek Magazine (6 pgs), Paris Match (France -- 8 pgs), Tempo (Germany -- 6 pgs), London Telegraph, Nieuwe Revu (Amsterdam -- 6 pgs) and in Japan, Korea, Holland, Denmark, Mexico, Spain, Italy as well as on Newsweek Online, and MSNBC.com Online.

He is also the author of Delta Time published in 1995 by the Smithsonian Institution Press. This book looks at rural Black poverty, cotton and the southern landscape. Delta Time has 104 photographs and an essay by legendary civil rights organizer Bob Moses. This work has been published in VSD  in Paris, Granta, the London Independent, Spanish Ellewith Walker Evans and in the Academy Award nominated documentary film Freedom on My Mind.

His other books are To The Promised Land (Aperture 1988), which examines the lives of farm workers and their journey from Mexico illegally to the United States and with an introduction by Cesear Chavez. With These Hands (Pilgrim Press 1986), and In the Fields (Harvest Press 1982) are earlier explorations of farm labor in the U.S.

A text, Witness In Our Time: The Lives of Social Documentary Photographers was published by the Smithsonian Institution Press in October 2000 and a second edition was published in 2010 . It is in its fourth printing and has been adapted by numerous University and College documentary photo programs as well as being translated and published in Turkey.

He received two National Endowment for the Arts Photographers Fellowships, a N.E.A survey and publication grant, the Dorothea Lange Fellowship and a fellowship from the Erna and Victor Hasselblad Foundation as well as grants from the Soros Open Society Institute, the American Film Institute, the California Arts Commission, International Fund for Concerned Photography, the Rosenberg Foundation and the Max and the Anna Levinson Foundation as well as the Johnathan Logan Family Foundation. Other awards include the Media Alliance Meritorious Achievement award in photography, the Thomas More Storke International Journalism Award.
He is the Reva and David Logan Professor of Photojournalism and curator of the Center for Photography at the Graduate School of Journalism at the University of California Berkeley, and was the 2012 Laventhol Visiting Professor at Columbia University Graduate School of Journalism. He has also taught workshops at many school and photo festivals including at the ICP in New York City, The Missouri Photo Workshop, S.F. Art Institute and in the School for Photographic Studies in Prague and Baltimore. He was a founder of the Mother Jones International Fund for Documentary Photography, which awarded grants to photographers worldwide, as well a founder of Fotovision a non-profit documentary photo organization which was based in the San Francisco Bay Area.

His editorial work is represented by Contact Press Images.